« Back to SSC News 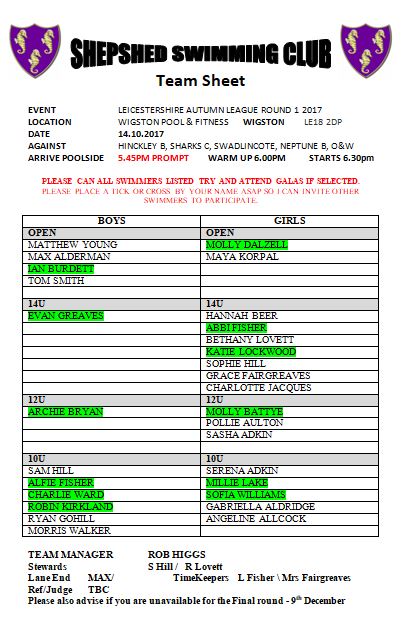 The Team sheet for the upcoming Fowkes Trophy Gala is now on the notice board, please indicate your availability as soon as possible.  Thank you 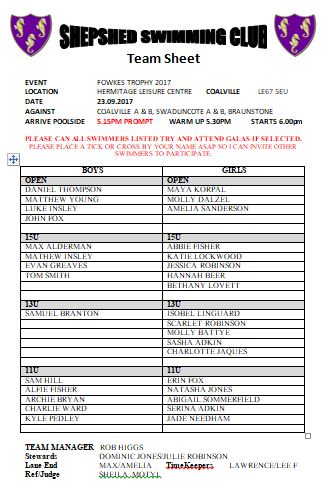 In the final Diddy Gala of 2017 we came an undeserved 5th.   We had some very strong individual wins particularly on Butterfly from Molly and Alfie. Jade produced a great swim on the backstroke to take first place. We did equally well on the relays but the boys under 11 produced a stunning performance to win their relays in commanding style – In one race more than half a length ahead.

The swimmers were all very busy in this gala, swimming more races than normal and in some cases two age groups up. Several swam more than 7 races, Sam and Alfie showed just how good they are when they raced individuals two age groups up and matched the pace of main group of swimmers each time.

The three captains who came to help the team out, unanimously agreed that the star swimmers should be given to the boys 11&U team that's Archie Bryan, Samuel Branton, Alfie Fisher and Sam Hill, for a fine team performance and being willing to swim additional events to fill in.

Thanks to Simon Sanderson, Amelia Sanderson, Simon Hill and Emma and Lee Fisher and Sheila Motyl who have supported these Diddy Galas and made your child's team swimming possible for at least the last 6 years.

As Julie and I move on from Diddy Galas, we can reflect and see that every year the club produces and group of enthusiastic swimmers who rapidly improve during this race period. It is a pleasure to witness their enjoyment, and its extra special when its coupled to a win.

Last night we came 4 out of 5 teams at the second Diddy Gala at Burton. The team did a great job, in a hot, cheery and well support event. You can really see that the swimmers are coming on Bethany Willingham’s diving and freestyle is almost unrecognisable from six months ago. Samuel Branson has come from almost nowhere to challenge top swimmers from much bigger clubs and Archie Bryan has improve significantly even in 6 weeks, and he wasn’t fazed by the false start in one of his races. You can really see the improvement in the swimmer’s performance in a short space of time.

The captains chose Natasha Jones as the star swimmer, she happily agreed to swim up an age group and cheerfully tried her best. She supported and cheered the team on and helped others…..just the kind of thing we need.

Alfie Fishers and Sam Hill were bedrocks in the team swimming more than six events each. There was a bit more pressure on the swimmers than usual as we had to juggle the team late in the day to cover for a couple of swimmers withdrawing due to sickness.

We welcomed Mille Lake and Jade Needham who had not swam for the club before, they did a great job despite being a bit nervous.

Thanks, again to the poolside team for helping to make it run smoothly. Special thanks to Liz Benham for stepping into the role of steward at very late notice.

The final gala is on 17 June, venue to be confirmed. The Team sheet will be will be issued during the week.

Thanks for your continued support.

There will be no training on either of the above dates, all other sessions will run as normal.